"What’s gotten in the way of education in the United States is a theory of social engineering that says there is ONE RIGHT WAY to proceed with growing up." ~ John Taylor Gatto

The Unschooled Mind: How Children Think and How Schools Should Teach Tools & Resources

There is More Than One Kind of Intelligence Videos & Podcasts

[There Is More Than One Kind Of Intelligence]

“The true sign of intelligence is not knowledge but imagination.” ~ Albert Einstein

"Education is no substitute for Intelligence." ~ Mentat Coda

“The problem with smart people is that they like to be right and sometimes will defend ideas to the death rather than admit they’re wrong… Until they come face to face with someone who is tenacious enough to dissect their logic, and resilient enough to endure the thinly veiled intellectual abuse they dish out during debate, they’re never forced to question their ability to defend bad ideas.” ~ Scott Berkun

“We are faced with the paradoxical fact that education has become one of the chief obstacles to intelligence and freedom of thought.” ~ Bertrand Russell

“Never confuse education with intelligence, you can have a PhD and still be an idiot.” ~ Richard P. Feynman

"I hate when people confuse education with intelligence. You can have a bachelor’s degree and still be an idiot.” ~ Elon Musk

“Every student can learn, just not on the same day or in the same way.” ~ George Evans

"The intelligence is proved not by ease of learning but by understanding what we learn." ~ Joseph Whitney

“To be yourself requires extraordinary intelligence. You are blessed with that intelligence; nobody need give it to you; nobody can take it away from you. He who lets that express itself in its own way is a “Natural Man”.” ~ U.G. Krishnamurti, [The Mystique of Enlightenment: The Radical Ideas of U.G. Krishnamurti]

“Ordinary people send their children to school to get smart, but what modern schooling teaches is dumbness.” ~ John Taylor Gatto, [The Underground History of American Education: An Intimate Investigation Into the Prison of Modern Schooling]

“The most difficult subjects can be explained to the most slow-witted man if he has not formed any idea of them already; but the simplest thing cannot be made clear to the most intelligent man if he is firmly persuaded that he knows already, without a shadow of doubt, what is laid before him.” ~ Leo Tolstoy 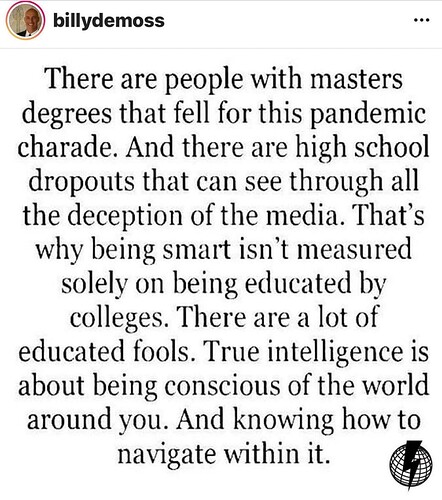 At Our Wits' End: Why We're Becoming Less Intelligent and What it Means for the...

The following customer review for the book above is very eye opening:
https://www.amazon.com/gp/customer-reviews/R2Y8THPT0MK38A

In Their Own Way: Discovering and Encouraging Your Child's Multiple...

“IQ” is a stale test meant to measure mental capacity but in fact mostly measures “extreme unintelligence” (learning difficulties)" "It is at the bottom an immoral measure that, while not working, can put people (and, worse, groups) in boxes for the rest of their lives." "There is no significant statistical association between IQ and hard measures such as wealth." "If you want to detect how someone fares at a task, say loan sharking, tennis playing, or random matrix theory, make him/her do th…

The Cult of Smart Tools & Resources

Fredrik makes some really great points in this interview, but as a far left socialist, he turns to socialism for the solution to the broken education system. While Fredrik realizes in the description for his book linked below states, “our education system can never create equal opportunity for all”, but then he calls for “This passionate, voice-driven manifesto demands that we embrace a new goal for education: equality of outcomes.” Equality of Outcomes = Socialism "I can’t imagine anything …

Thinking Hats: How we learn to THINK Videos & Podcasts

[Thinking Hats: How we learn to THINK] #ad

How To Outsmart Everybody Else | Jordan Peterson Videos & Podcasts

I, Pencil: The Movie Videos & Podcasts

AMAZING! Must Watch…adapted from the 1958 essay by Leonard E. Read