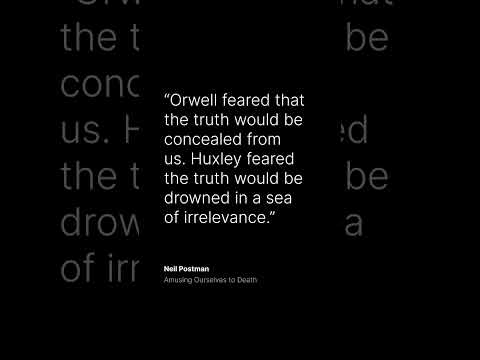 Orwell vs Huxley - Who was Right?

This is a clip from our video George Orwell and 1984: How Freedom DiesWatch it and access the transcript here - https://academyofideas.com/2017/12/george-orw... 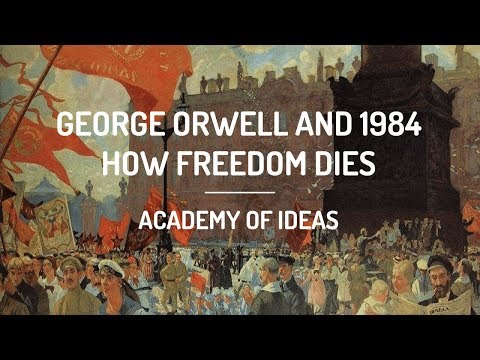 “We were keeping our eye on 1984. When the year came and the prophecy didn’t, thoughtful Americans sang softly in praise of themselves. The roots of liberal democracy had held. Wherever else the terror had happened, we, at least, had not been visited by Orwellian nightmares.

But we had forgotten that alongside Orwell’s dark vision, there was another - slightly older, slightly less well known, equally chilling: Aldous Huxley’s Brave New World. Contrary to common belief even among the educated, Huxley and Orwell did not prophesy the same thing. Orwell warns that we will be overcome by an externally imposed oppression. But in Huxley’s vision, no Big Brother is required to deprive people of their autonomy, maturity and history. As he saw it, people will come to love their oppression, to adore the technologies that undo their capacities to think.

This book is about the possibility that Huxley, not Orwell, was right.”
~ Neil Postman, [Amusing Ourselves to Death: Public Discourse in the Age of Show Business]

Is 1984 Becoming a Reality? - George Orwell's Warning to the World Videos & Podcasts

“There will be, in the next generation or so, a pharmacological method of making people love their servitude, and producing dictatorship without tears, so to speak, producing a kind of painless concentration camp for entire societies, so that people will in fact have their liberties taken away from them, but will rather enjoy it, because they will be distracted from any desire to rebel by propaganda or brainwashing, or brainwashing enhanced by pharmacological methods. And this seems to be the f…

#ad "The main lesson of “1984” is not “Persistent Surveillance is Bad” or “Authoritarian Governments Are Dangerous.” These are true statements, but not the most important message. “1984" is at its core a novel about language; how it can be used by governments to subjugate and obfuscate and by citizens to resist oppression." [GeorgeOrwell] https://www.unschooling.com/search?q=orwell 1984 is listed on a Banned Books list:

“At this point we find ourselves confronted by a very disquieting question: Do we really wish to act upon our knowledge? Does a majority of the population think it worthwhile to take a good deal of trouble, in order to halt and, if possible, reverse the current drift toward totalitarian control of everything? If the United States of America is the prophetic image of the rest of the urban-industrial world as it will be a few years from now — recent public opinion polls have revealed that an actu…