Nestlé: The Most Evil Business in the World

Nestle is the Biggest Food Company in the World!

"Great book I read called “Milk, money and madness” explained how NESTLE interfered with women in developing countries by supplying free samples of formula so the baby would become dependent and moms milk dried up. These poor women had no choice but to spend all their money on formula to save their babies." ~ Tinoot Noot 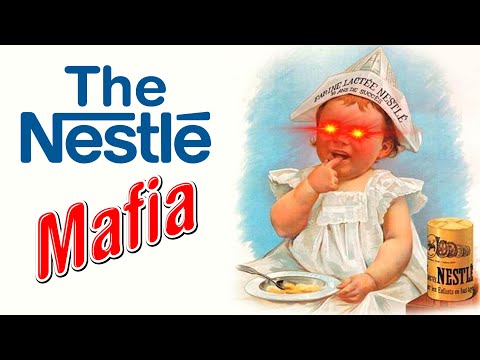 Boycott Hershey, Nestlé, & Mars Multinational corporations should not be using child slave labor to reap windfall profits One of the comments brings up a good point: “We don’t even really enjoy Nestle, Hershey’s, or Mars anymore. We did when we were kids, but all kids are put through slavery. It’s called school. Does that mean that somewhere else on earth, kids go through picking Caocao fruit?” American children are put through a different kind of slavery which may even be more detrimental…

“The illusion of freedom will continue for as long as it’s profitable to continue the illusion. At the point where the illusion becomes too expensive to maintain, they will take down the scenery, move the tables and chairs out of the way, then they will pull back the curtains and you will see the brick wall at the back of the theater." ~ Frank Zappa "If you can see through the illusion, you are part of the solution." "Sometimes people don’t want to hear the truth because they don’t want t…

This is a Must Watch documentary if you want to learn who owns our water supply and understand how the drought is being manufactured. Trailer [Water & Power: A California Heist - Trailer] #ad Water is #3 on our Top 10 Reasons Kids Are Failing

Water is #3 on our Top 10 Reasons Kids Are Failing

"Children Are More Depressed Today Than They Were During The Great Depression!" ~ Peter Gray As parents, we have to step up for our kids, as no one else will, the system that enslaves them was designed to fail them in every way. We have had many rights movements, now it is time for the Children’s Rights movement! Children are the easiest age group to control, it’s time we set them free! It seems human civilization has always been about a small minority of powerful people controlling the large …