"Education is supposed to teach you how to think, not what to think." ~ Ann Widdecombe

“Most of life’s problems are because of two reasons: we act without thinking or we think without acting.” ~ Unknown

“Reading furnishes the mind only with materials of knowledge; it is thinking that makes what we read ours.” ~ John Locke

"Sadly, children’s passion for thinking often ends when they encounter a world that seeks to educate them for conformity and obedience only." ~ Bell Hooks

“Dare to think for yourself.” ~ Voltaire

"What luck for rulers that men do not think" ~ Adolf Hitler

"Thinking is difficult, that is why most people judge." ~ Carl Jung

“We become what we think about.” ~ Earl Nightingale

“The mind is everything. What you think, you become.” ~ Buddha

“A man is but the product of his thought, what he thinks, he becomes.” ~ Mahatma Gandhi

“Give the pupils something to do, not something to learn; and the doing is of such a nature as to demand thinking; learning naturally results.” ~ John Dewey [The Father of American Education]

"If children are being told WHAT to learn, WHEN and HOW to learn, 6 hours a day, 5 DAYS A WEEK - no wonder CREATIVE THINKING in children is plummeting, and ANXIETY & DEPRESSION is continuing to rise." ~ Kirsty Lee

“When you want to teach children to think, you begin by treating them seriously when they are little, giving them responsibilities, talking to them candidly, providing privacy and solitude for them, and making them readers and thinkers of significant thoughts from the beginning. That’s if you want to teach them to think.” ~ Bertrand Russell

"Governments don’t want a population capable of critical thinking, they want obedient workers, people just smart enough to run the machines and just dumb enough to passively accept their situation.You have no choice. You have owners. They own you. They own everything. They own all the important land. They own, and control the corporations. They’ve long since bought, and paid for the Senate, the Congress, the state houses, the city halls, they got the judges in their back pockets and they own all the big media companies, so they control just about all of the news and information you get to hear." ~ George Carlin

“I am beginning to suspect all elaborate and special systems of education. They seem to me to be built upon the supposition that every child is a kind of idiot who must be taught to think. Whereas, if the child is left to himself, he will think more and better, if less showily. Let him go and come freely, let him touch real things and combine his impressions for himself, instead of sitting indoors at a little round table, while a sweet-voiced teacher suggests that he build a stone wall with his wooden blocks, or make a rainbow out of strips of colored paper, or plant straw trees in bead flower-pots. Such teaching fills the mind with artificial associations that must be got rid of, before the child can develop independent ideas out of actual experience.” ~ Anne Sullivan (Helen Keller’s mentor and friend) How To Master Your Critical Thinking Skills 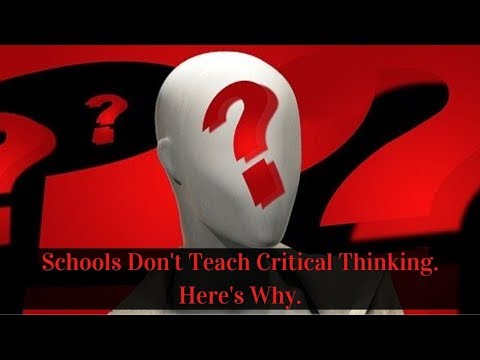 Humans are either slaves to human nature or masters of human nature. "Be a free thinker and don’t accept everything you hear as truth. Be critical and evaluate what you believe in." ~ Aristotle (384 - 322 BC) “Schooling was influenced by the idea that self-directed learning created ‘dangerous,’ free-thinking, intelligent people who would make sure the government never became more powerful than the people.” ~ Laurie A. Couture “Freethinkers are those who are willing to use their minds wit…

“Schooling that children are forced to endure—in which the subject matter is imposed by others and the “learning” is motivated by extrinsic rewards and punishments rather than by the children’s true interests—turns learning from a joyful activity into a chore, to be avoided whenever possible. Coercive schooling, which tragically is the norm in our society, suppresses curiosity and overrides children’s natural ways of learning. It also promotes anxiety, depression and feelings of helplessness th…

“By way of grants, they spent millions of dollars, money which was used to radically bend the traditionalist education system toward a new system that favored standardized testing over critical thinking, toward “scientific management” in schools. This was part of a calculated plan to make the schooling system benefit corporate America, at the expense of the American school child.” https://educate-yourself.org/ga/RF4chap1976.shtml https://www.rockefellerfoundation.org/grants/?post_type=gr…