Free Play is non-existent at schools and is essential for Self Discovery, Curiosity, and Creativity to flourish which are squashed and squandered at schools. Play based learning gives children the opportunity to develop The Five C’s of Education.

"Self-education through play and exploration requires enormous amounts of unscheduled time—time to do whatever one wants to do, without pressure, judgment, or intrusion from authority figures. That time is needed to make friends, play with ideas and materials, experience and overcome boredom, learn from one’s own mistakes, and develop passions.” ~ Peter Gray [Free to Learn]

"Life must be lived as play." ~ Plato

"All education is self-discovery." ~ Ray Bradbury

“The things that children learn through their own initiatives, in free play, cannot be taught in other ways.” ~ Peter Gray

“It had long since come to my attention that people of accomplishment rarely sat back and let things happen to them. They went out and happened to things.” ~ Leonardo da Vinci

"Necessity may be the mother of invention, but play is certainly the father." ~ Roger von Oech

“When you teach a child something you take away forever his chance of discovering it for himself.” ~ Jean Piaget

"Play is our brains favorite way of learning." ~ Diane Ackerman

"This is the real secret of life – to be completely engaged with what you are doing in the here and now. And instead of calling it work, realize it is play." ~ Alan Watts

"Play is the highest expression of human development in childhood for it alone is the free expression of what is in a child’s soul." ~ Friedrich Frobel

"The lifelong success of children is based on their ability to be creative and to apply the lessons learned from playing." ~ American Academy of Pediatrics

“Only if you reject all the other paths can you discover your own path.” ~ U.G. Krishnamurti, [Mind Is a Myth]

"I know of nothing more inspiring than that of making discoveries for ones self." ~ George Washington Carver

“It is a very grave mistake to think that the enjoyment of seeing and searching can be promoted by means of coercion and a sense of duty.” ~ Albert Einstein

"Combinatory play seems to be the essential feature in productive thought." ~ Albert Einstein

Carl Jung said “anything truly new comes from the sense of play” Play on.

“It’s not that we spend five days looking forward to just two. It’s that most people do what they enjoy most on those two days. Imagine living a life where everyday are your Saturdays and Sundays. Make everyday your weekend. Make everyday a play-day…” ~ James A. Murphy, [The Waves of Life Quotes and Daily Meditations]

"To me creative living is any life that is guided more strongly by curiosity than fear." ~ Elizabeth Gilbert

"What is a teacher? I’ll tell you: it isn’t someone who teaches something, but someone who inspires the student to give of her best in order to discover what she already knows." ~ Paulo Coelho

"There are children playing in the streets who could solve some of my top problems in physics, because they have modes of sensory perception that I lost long ago." ~ J. Robert Oppenheimer

"Decades of research has shown that play is crucial to physical, intellectual, and social-emotional development at all ages. This is especially true of the purest form of play: the unstructured, self-motivated, imaginative, independent kind,…" ~ David Elkind

"Play is a powerful tool for learning, but it also strengthens childrens physical, social, emotional, and cognitive development. In general, the more adventurous the play, the greater its value." ~ Joan Almon

"Remember as well, that children at play are insulated from the alarming world around them. Play is a sanctuary of safety. Play is also the original school, far more effective than anything society could possibly invent. Rather than try to make the home a school, it would be much more important in these times to make the home a true playground where Nature can take care of all of us. In true play, the engagement is in the activity, not the outcome. Most screen play does not qualify." ~ Gordon Neufeld

"As part of our obsession with early achievement, we’ve turned quitting into a pejorative, an insult that cuts straight to our sense of self-worth. And that’s not just unfair, it’s destructive. In a drive to suppress individuality and reinforce cultural norms, society has turned one of the most effective tools for self-discovery into a proverbial four-letter word. It’s Taylorism at its worst, reinforcing the message: Stay on the culturally accepted conveyor belt to success at all costs." ~ Rich Karlgaard 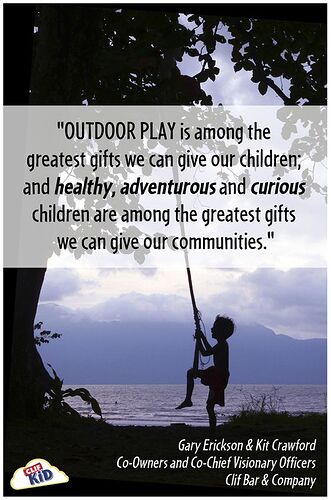 WOW! Must Watch Interview with Joseph Chilton Pearce! [Joseph Chilton Pearce - Play IS Learning] Here you can watch the FULL Interview and see amazing insights: https://ttfuture.org/academy/678 Here is Insight #5: “One competing against the other. At this stage is completely out of keeping, it’s inappropriate to the stage of development itself. A child only their own, naturally, will never play in that fashion. That isn’t play again. When the minute we come in with organized spo…

The Five C’s Of Education
Curiosity
Nature Play
Self Education
Childhood
Don't Bring School Home
13 Reasons Why Not to Go to School
Play, Passion, Purpose
Untoys
Unschooled, Unvaccinated, and Unmasked
Adventure Playgrounds
Children are stuck inside more than ever – how can we give them back their freedom?