The education system will never care about your education.

“Many who are self-taught far excel the doctors, masters, and bachelors of the most renowned universities.” ~ Ludwig von Mises

"If children started school at six months old and their teachers gave them walking lessons, within a single generation people would come to believe that humans couldn’t learn to walk without going to school." ~ Geoffrey D. Graham

“Education should aim at destroying free will so that after pupils are thus schooled they will be incapable throughout the rest of their lives of thinking or acting otherwise than as their school masters would have wished.” ~ Johann Gottlieb Fichte

"The child himself is the curriculum." ~ Rudolf Steiner

"When you really pay attention, everything is your teacher." ~ Unknown

“All men who have turned out worth anything have had the chief hand in their own education.” ~ Sir Walter Scott

"What we call education is nothing but domestication of the human being." ~ Don Miguel Ruiz

"So many “learning disabilities” are in fact styles of self-directed learning that are not fully appreciated." ~ Yaakov Mintz

“There is no neutral education. Education is either for domestication or for freedom.” ~ Joao Coutinho

“You have your way. I have my way. As for the right way, the correct way, and the only way, it does not exist.” ~ Friedrich Nietzsche

“I think self-education is the greatest and best thing you could ever make.” ~ Tony Robbins

“Schooling was influenced by the idea that self-directed learning created ‘dangerous,’ free-thinking, intelligent people who would make sure the government never became more powerful than the people.” ~ Laurie A. Couture

“There is only one Education, and it has only one goal: the freedom of the mind. Anything that needs an adjective, be it civics education, or socialist education, or Christian education, or whatever-you-like education, is not education, and it has some different goal. The very existence of modified “educations” is testimony to the fact that their proponents cannot bring about what they want in a mind that is free. An “education” that cannot do its work in a free mind, and so must “teach” by homily and precept in the service of these feelings and attitudes and beliefs rather than those, is pure and unmistakable tyranny.“ ~ Richard Mitchell, The Underground Grammarian

“Learning is the human activity that least needs manipulation by others. Most learning is not the result of instruction. It is rather the result of unhampered participation in a meaningful activity." ~ Ivan Illich

“Our job is obvious: we need to get out of the way, shine a light, and empower a new generation to teach itself and to go further and faster than any generation ever has.” ~ Seth Godin

"What we are merely taught seldom nourishes the mind like that which we teach ourselves.” ~ Carter G. Woodson

“None of the world’s problems will have a solution until the world’s individuals become thoroughly self-educated.” ~ Buckminster Fuller

"Listen to the desires of your children. Encourage them and then give them the autonomy to make their own decision." ~ Denis Waitley

“Do not train a child to learn by force or harshness; but direct them to it by what amuses their minds, so that you may be better able to discover with accuracy the peculiar bent of the genius of each.” ~ Plato

"Society cannot contribute anything to the breeding and growing of ingenious men. A creative genius cannot be trained. There are no schools for creativeness. A genius is precisely a man who defies all schools and rules, who deviates from the traditional roads of routine and opens up new paths through land inaccessible before. A genius is always a teacher, never a pupil; he is always self-made." ~ Ludwig von Mises

"When we have children who learn different, think different, are wired differently, and when our focus (as parents) is on recognizing and embracing who that child is and to help them as they are, then unschooling fits perfectly." ~ Shannon Stoltz

"A child knows what she wants and needs to know right now, what her mind is ready and hungry for. If we try to make her learn something else that we think is more important, chances are that she won’t learn it, that she will soon forget most of what she learned and - worst of all - will before long lose most of her appetite for learning anything." ~ John Holt

"Self-education through play and exploration requires enormous amounts of unscheduled time—time to do whatever one wants to do, without pressure, judgment, or intrusion from authority figures. That time is needed to make friends, play with ideas and materials, experience and overcome boredom, learn from one’s own mistakes, and develop passions.” ~ Peter Gray [Free to Learn]

“You will never have a greater or lesser dominion than that over yourself…the height of a man’s success is gauged by his self-mastery; the depth of his failure by his self-abandonment. …And this law is the expression of eternal justice. He who cannot establish dominion over himself will have no dominion over others.” ~ Leonardo da Vinci

"Every person has two educations, one which he receives from others, and one, more important, which he gives to himself." ~ Edward Gibbon, 1737-1794, English historian

"No one is ever really taught by another; each of us has to teach himself. The external teacher offers only the suggestion, which arouses the internal teacher, who helps us to understand things." ~ Swami Vivekananda

“Few things are more important than learning how to learn.” ~ Richie Norton

"Only the educated are free." ~ Epictetus

"The height of a man’s success is gauged by his self-mastery; the depth of his failure by his self-abandonment…he who cannot establish a dominion over himself will have no dominion over others. He who masters himself shall be a king." ~ Spencer W Kimball

"The object of teaching a child is to enable the child to get along without the teacher. We need to educate our children for their future, not our past." ~ Arthur C. Clarke

“Have you ever seen a six-month-old or a three-year-old who’s not curious and self-directed? I haven’t. That’s how we are out of the box.” ~ Daniel Pink

“You can’t really teach a kid anything: you can only show him the way and motivate him to learn it himself.” ~ Dave Cullen

"It is impossible for one human being to educate another. You cannot educate a child, you can only inspire a child to educate himself or herself." ~ Oliver DeMille

“Happiness belongs to the self-sufficient.” ~ Aristotle

“What you love to do, you will learn to do well.” ~ Japanese Proverb

“When you teach a child something you take away forever his chance of discovering it for himself.” ~ Jean Piaget

"There is no greater education than one that is self-driven." ~ Neil DeGrasse Tyson

"Children have to be educated, but they have also to be left to educate themselves." ~ Ernest Dimnet

"The object of education is to prepare the young to educate themselves throughout their lives." ~ Robert Maynard Hutchins

"A child is innately wise and realistic. If left to himself without adult suggestion of any kind, he will develop as far as he is capable of developing." ~ Founder of pioneering democratic free school Summerhill, A.S. Neill, wrote in his 1960 book

“If we value independence, if we are disturbed by the growing conformity of knowledge, of values, of attitudes, which our present system induces, then we may wish to set up conditions of learning which make for uniqueness, for self-direction, and for self-initiated learning.” ~ Carl Rogers

“Schools assume that children are not interested in learning and are not much good at it, that they will not learn unless made to, that they cannot learn unless shown how, and that the way to make them learn is to divide up the prescribed material into a sequence of tiny tasks to be mastered one at a time, each with it’s appropriate ‘morsel’ and ‘shock.’ And when this method doesn’t work, the schools assume there is something wrong with the children – something they must try to diagnose and treat.” ~ John Holt

“It’s not so much what children learn through play, but what they won’t learn if we don’t give them the chance to play. Many functional skills like literacy and arithmetic can be learned either through play or through instruction – the issue is the amount of stress on the child. However, many coping skills like compassion, self-regulation, self-confidence, the habit of active engagement, and the motivation to learn and be literate cannot be instructed. They can only be learned through self-directed experience (i.e. play)." ~ Susan J. Oliver

Most “education” companies are scams that know that homeschooling is Controlled Opposition so it makes sense that they play both sides, schooling & homeschooling, thinking most parents will be too dumb to realize, it’s called Hegelian Dialectic. "The child himself is the curriculum." ~ Rudolf Steiner Homeschooling is bringing school home. Your home becomes the classroom, you become the teacher, and your kids follow whatever curriculum you force feed them instead of giving them the freedom to… 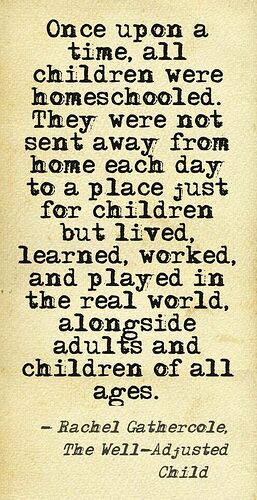 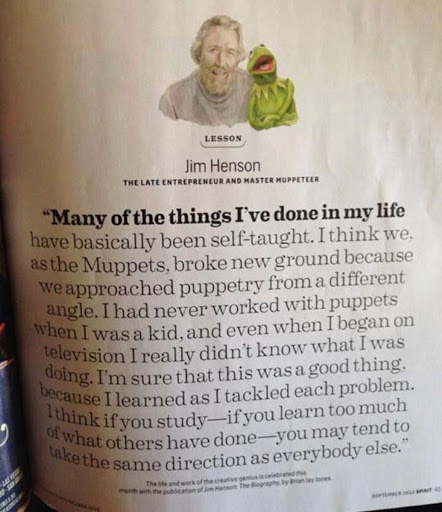 Is there a better way to learn about REAL LIFE than by living it? Life is too short to spend nearly a quarter of our lives being schooled how to live. “When you get down to it, unschooling is really just a fancy term for ‘life’ or ‘growing up uninstitutionalized’.” ~ Grace Llewellyn “You only have one life to live. Make sure it’s yours.” ~ Eleanor Brown "The tragedy of life is not that it ends so soon, but that we wait so long to begin it." ~ Richard L Evans "The price of anything is …

13 Reasons Why Not to Go to School General Discussion & News

Why do people choose unschooling as a way of learning? Here are 13 reasons why not to go to school: Aside from the fact it is a complete waste of our two most valuable assets in life: time and energy. Your life is determined by how you manage these two assets so ask yourself if you’re truly spending your time and energy wisely or are you wasting your most important assets being a cog in the machine? “Most people spend more time and energy going around problems than in trying to solve them.” ~…

Secrets of a Buccaneer-Scholar: Self-Education and the Pursuit of Passion Tools & Resources

“A buccaneer scholar is anyone whose love of learning is not muzzled, yoked, or shackled by any institution or authority; whose mind is driven to wander and find its own voice and place in the world.” James Bach holds no formal degrees, yet he is an expert in the field of computer software testing. His list of accomplishments – from Apple Computers to Silicon Valley and many places in between–is truly remarkable. James dropped out of school early in life and later at 20, was the youngest mana…

The Self Educating Child Stories & Articles

Mr. Money Mustache recommends Con Academy which I would definitely not recommend…

Follow Dr. Gray and Daniel Prince as they enter the rabbit hole of Schools being prisons, how his 9-year-old son told him and all his school principles and psychologists to go to hell and why self-directed education is so important to nurture and develop self sovereignty.

"Nobody Can Educate You, Except Yourself" - SELF-MANAGEMENT Videos & Podcasts

["Nobody Can Educate You, Except Yourself" - SELF-MANAGEMENT - John Taylor Gatto]

Free Play is non-existent at schools and is essential for Self Discovery, Curiosity, and Creativity to flourish which are squashed and squandered at schools. Play based learning gives children the opportunity to develop The Five C’s of Education. "Unschooling is not about the discovery of any particular body of knowledge. It is about the discovery of self." ~ Ben Hewitt [Home Grown] "Self-education through play and exploration requires enormous amounts of unscheduled time—time to do whateve…

“Self-education is, I firmly believe, the only kind of education there is.” ~ Isaac Asimov "Like prison, the reward of school, is getting out."

Not Even HALF Of Students - At ANY Grade Level, Are Proficient In ANYTHING

Schooling is an EPIC FAILURE! https://www.nationsreportcard.gov/