Are there any differences between Schools vs Prisons?

“There are only two places in the world where time takes precedence over the job to be done. School and prison.” ~ William Glasser

"It’s a tragedy how badly some people are brainwashed into believing an institutionalized setting akin to the prison system is the only way a child will grow up to be a “functioning adult.”

"Like prison, the reward of school, is getting out." ~ Isaac Asimov

"All restraints upon man’s natural liberty, not necessary for the simple maintenance of justice, are of the nature of slavery, and differ from each other only in degree." ~ Lysander Spooner

“Every day in communities across the United States, children and adolescents spend the majority of their waking hours in schools that have increasingly come to resemble places of detention more than places of learning. From metal detectors to drug tests, from increased policing to all-seeing electronic surveillance, the public schools of the twenty-first century reflect a society that has become fixated on crime, security and violence.”[1]—Investigative journalist Annette Fuentes. (Story by John W. Whitehead, republished from Rutherford.org.)

“I was undisciplined by birth, never would I bend, even in my tender youth, to a rule. It was at home I learned the little I know. Schools always appeared to me like a prison, and never could I make up my mind to stay there, not even for four hours a day, when the sunshine was inviting, the sea smooth, and when it was joy to run about the cliffs in the free air, or to paddle in the water.” ~ Claude Monet

“Everyone who has ever been to school knows that school is prison, but almost nobody beyond school age says it is. It’s not polite. We all tiptoe around the truth because admitting it would make us seem cruel and would point a finger at well-intentioned people doing what they believe to be essential. . . . A prison, according to the common, general definition, is any place of involuntary confinement and restriction of liberty. In school, as in adult prisons, the inmates are told exactly what they must do and are punished for failure to comply. Actually, students in school must spend more time doing exactly what they are told than is true of adults in penal institutions. Another difference, of course, is that we put adults in prison because they have committed a crime, while we put children in school because of their age.” ~ Peter O. Gray, [Free to Learn: Why Unleashing the Instinct to Play Will Make Our Children Happier, More Self-Reliant, and Better Students for Life]

WHAT HAPPENS WHEN YOU PUT GOOD PEOPLE IN AN EVIL PLACE? DOES HUMANITY WIN OVER EVIL, OR DOES EVIL TRIUMPH? THESE ARE SOME OF THE QUESTIONS WE POSED IN THIS DRAMATIC SIMULATION OF PRISON LIFE CONDUCTED IN 1971 AT STANFORD UNIVERSITY. https://www.prisonexp.org/ 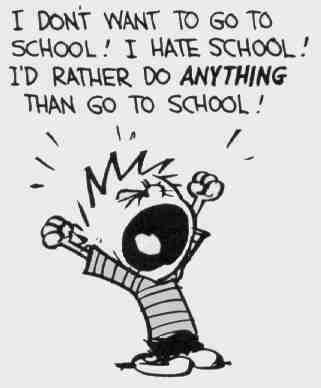 Policing the Public Schools: How Schools Are Becoming Even More Like Prisons...

Concern about school shootings is driving an increased police presence in America's schools. Tennessee, for instance, recently dedicated $50 million to put a police officer in every school. Rather than deterring mass shootings, armed guards at...

The United States has the largest prison population in the world and its growing fast! "Researchers link the findings to lower rates of marriage, income and employment — and increased “zero tolerance” law enforcement efforts, says study author James P. Smith, are “likely a critical driver of this trend,” as well."

13 Reasons Why Not to Go to School
Top 10 Industries Preying on Children
Compulsory Education Laws By State & Age
Welcome to Dropouts.com | Opportunities for Dropouts
Welcome to Unschooling
Montessori Schools Are Scams