As our society becomes more technology based with people living in the Metaverse and completely disconnected from reality with video games, artificial intelligence, and smart devices and children are being sucked into artificial realities like never before. This is motivating many families to get back to nature with Homesteading which is seeing a major resurgence in popularity. These families are done with the materialistic consumerism culture and want to rekindle what really matters in this world and give their children real life skills in creating their lives rather than being part of the toxic all-consuming culture, they value self-sustainability.

When you truly think about it, the American landscape hasn’t really changed all that much…
We just went from farmers herding cattle to politicians herding humans on a tax farm. And we’re progressing to solely herding humans by killing all the cattle. Human Livestock!

We moved from an agrarian based economy where cultivating the land is the primary source of wealth to an industrial based economy which included industrializing agriculture leading to the #4 reason kids are failing and the greatest heist of all time. Just as everything was being industrialized, we made the grave mistake of industrializing and institutionalizing childhood. Then we moved to a service based economy where the entire economy was based on providing services without anyone actually making or creating anything. This is why most all American manufacturing was outsourced to countries with cheap slave labor. Today, we live in a technology-based economy that is rapidly evolving to the point it is causing massive widespread disease while disconnecting our society from our roots. Cities are filled with constant noise and light pollution that are toxic to our health and well-being instead of hearing the sounds of nature and surrounding ourselves with the true beauty of the natural world. Most children today spend most of their childhoods living sedentary lives sitting in classrooms which is incredibly detrimental to their health and well-being.

"Maybe a person’s time would be as well spent raising food as raising money to buy food." ~ Frank A. Clark

“Let us never forget that the cultivation of the earth is the most important labor of man." ~ Daniel Webster

“The greatest fruit of self-sufficiency is freedom.” ~ Epicurus

“You can solve all the world’s problems in a garden.” ~ Bill Mollison

"Do you see how hard the ants and bees are working to make the world a better place? And you are not willing to do your job as a human being? Why?" ~ Marcus Aurelius Meditations

Throughout the ages to be educated meant to be unproductive… our word “school” - and its equivalent in all European languages - derives from a Greek word meaning “leisure.” ~ Peter Drucker, [1909–2005, Austrian management guru]

"It is natural for anyone seeking to live a simple life to have concern for the origin and purity of their food (and clothing)." ~ John Lane, Timeless Simplicity

"The Industrial Revolution and its consequences have been a disaster for the human race. They have greatly increased the life-expectancy of those of us who live in “advanced” countries, but they have destabilized society, have made life unfulfilling, have subjected human beings to indignities, have led to widespread psychological suffering (in the Third World to physical suffering as well) and have inflicted severe damage on the natural world. The continued development of technology will worsen the situation. It will certainly subject human beings to greater indignities and inflict greater damage on the natural world, it will probably lead to greater social disruption and psychological suffering, and it may lead to increased physical suffering even in “advanced” countries.” ~ Theodore John Kaczynski, [Industrial Society and Its Future]

School deprives people of the necessities of life in exchange for an artificial reality that keeps people enslaved while they chase pieces of paper. Schooling is the dehumanization of humanity that normalizes insanity. Schooling is the exact opposite of what humanity needs to thrive which is why it sucks the life out of you. People literally sacrifice themselves for their schooling and this reality couldn’t be more obvious than it is today with schools and colleges force vaccinating students en …

The Most Brilliant Heist In History Videos & Podcasts

"The first problem of a drastic reduction of the land-using population is to keep the land producing in the absence of the people." "Land that is in use, if the use is to continue, must be used with care and care is not and can never be an industrial product or an industrial result." “There is in fact no significant difference between the mass destruction of warfare and massive destruction of industrial land abuse.” ~ Wendell Berry [The Most Brilliant Heist In History] [FQ7jh44X…

“If you wanted to create an education environment that was directly opposed to what the brain was good at doing, you probably would create something like a classroom.” ~ John J. Medina, Author of the New York Times Bestseller, [Brain Rules]

“In an agricultural society, or during a time of exploration and settlement, or hunting and fathering–which is to say, most of mankind’s history–energetic boys were particularly prized for their strength, speed, and agility. […] As recently as the 1950s, most families still had some kind of agricultural connection. Many of these children, girls as well as boys, would have been directing their energy and physicality in constructive ways: doing farm chores, baling hay, splashing in the swimming hole, climbing trees, racing to the sandlot for a game of baseball. Their unregimented play would have been steeped in nature.” ~ Richard Louv, Last Child in the Woods: Saving Our Children from Nature-Deficit Disorder

"Convincing the peasants to stop growing food in their yards and replace it with inedible grass that they mow every week gave the ruling class a hell of an advantage. 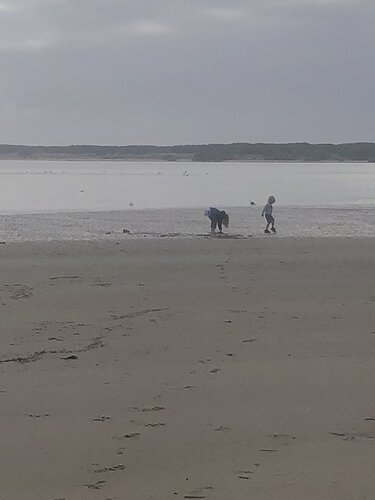 @
One thing that’s so interesting about homeschooling/unschooling is that on “school days we’re often the only people outside - at beaches, trails, rivers. I often think, what if everyone was just…outside? Doing stuff on land and with each other? What a difference we could make.”
@
The answer is literally in our hands
@
REMINDER: if one in ten American households raised a 1/2 acre garden and kept 35 laying hens, there would be no industrial egg or vegetable production (level one)
@
If those same households raised ten hogs per year, it would eliminate the industrial pork industry (level two)
@
If those same households (or another neighbor household) kept two dairy cows, not only would industrial dairy be eliminated, but American dairy production would triple. (level three)
@
Obviously, a sane government would incentivize these practices by offering significant tax relief to any family that undertakes them with integrity. Sadly, the American state is occupied by actors who despise the American nation. But that won’t be true for much longer. 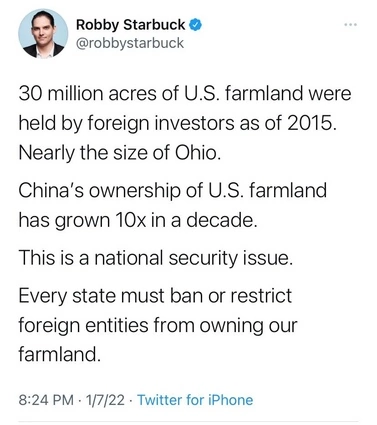 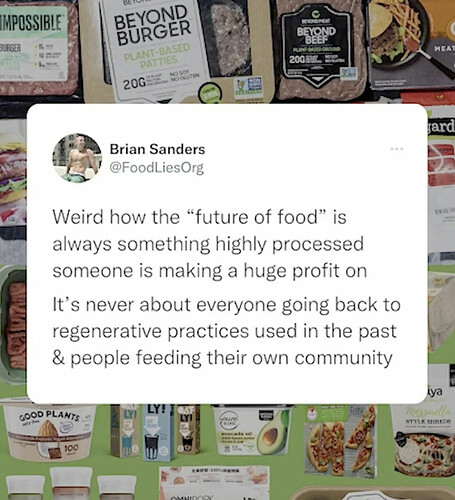 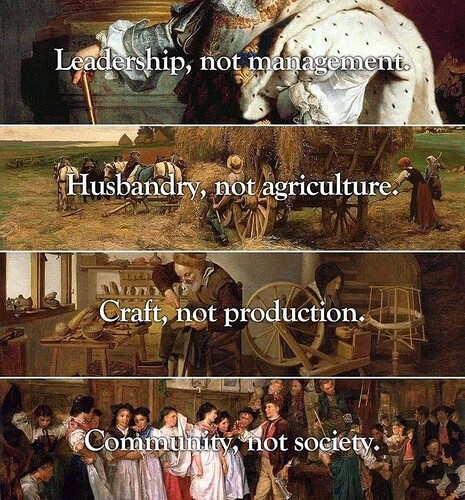 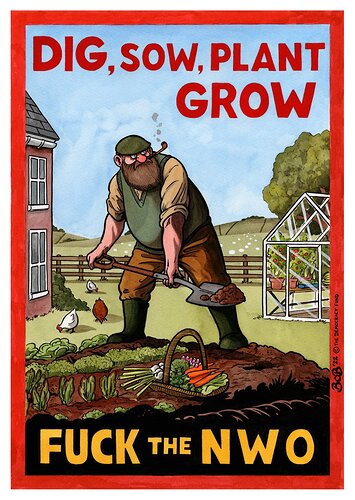 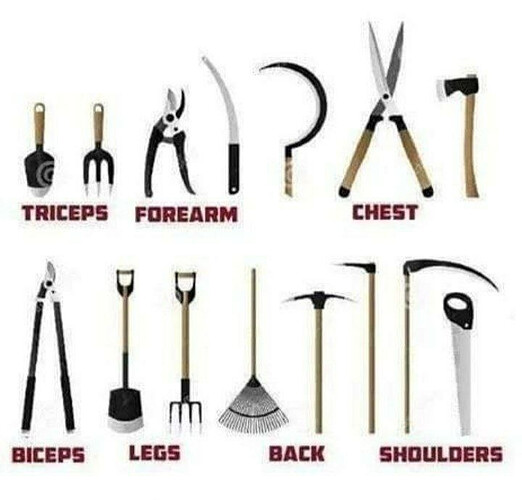 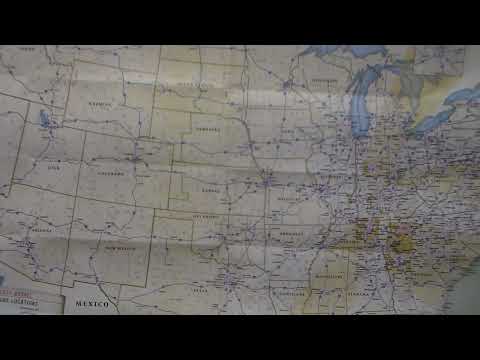 Will Mankind Be Extinct In a Few Years? Stories & Articles

In the following post, Peter Gray discusses the wisdom of Hunter-Gatherers and how children are designed by nature to educate themselves:

“Most remarkably, unlike any other people that have been studied, hunter-gatherers appear to lack hierarchy in social organization. They have no chief or big man, no leaders or followers…” ~ Peter Gray

What Can We Create Instead of Consuming? Questions & Answers

Most people merely consume their way through life, their lives are all-consuming where almost every aspect of their lives is someone else’s creation. It’s no surprise why we do this, as we often spend the first quarter of our lives, our most important years of learning, consuming other peoples creations instead of creating the life we want. Are you creating the life you want or consuming the life you have? Get In To The Habit Of Asking Yourself: "Does This Support The Life I’m Trying To Create?…

When we divert & divest from nature, we suffer the consequences, and it’s making our society sicker than ever before. When you choose SMART anything, such as a Smart Phone, it’s actually the opposite of smart because it’s a diversion from natural. The Natural way is the only smart way. Nature is the answer to all of our problems! We need to experience a paradigm shift in how we live in the world because we currently live in ways that our toxic to ourselves, our environments, and all the species …

"Children Are More Depressed Today Than They Were During The Great Depression!" ~ Peter Gray As parents, we have to step up for our kids, as no one else will, the system that enslaves them was designed to fail them in every way. We have had many rights movements, now it is time for the Children’s Rights movement! Children are the easiest age group to control, it’s time we set them free! It seems human civilization has always been about a small minority of powerful people controlling the large …

One of the absolute worst aspects of school is the “free” food. Schools not only control what children eat, but also when they eat. Children aren’t allowed to eat when they are hungry, they have to eat when they are told. It’s all fake processed GMO’s loaded with toxic chemicals, designed to keep kids sick and dumbed down. School food is junk food. The artificial food corporations in cahoots with Department of Education don’t care at all about children’s health. These corporations are getting ri…

"to help kids fight climate change" :clown_face:Of course, its highly processed junk food made from genetically modified soybeans. School Food is and has always been junk food and since Bill Gates controls the schools and is one of the largest investors and touters of fake meat, this is to be expected. Boys will be even more feminized consuming large amounts of GMO soy everyday. Children are slaves to compulsory schooling. Schools are human farms. Don’t outsource your children to the people ens…

Manufactured Food Crisis
Unprocessed
Rat Race
Why Don't Children Work Anymore?
China Bought $6.1 Billion in US Real Estate Last Year
Learn How To OWN Your Land Free Of Taxes & Regulations
Childhood
Ancestral Knowledge
Herbal Activities for Children
Unpasteurized
Artificial Scarcity
The Real History of Veganism
When the Family Is Abolished, People Starve
Homemade is WAY Better Than Store-bought
Bill Gates is America's Largest Farmland Owner
Greenwashing
The Real World
Two Reasons Why Amish LIMIT Schooling
Degeneration
The No-Dig Children's Gardening Book: Easy and fun family gardening
We're SCREWED! Testosterone Levels at the Point of NO RETURN! | Buddy Brown
The SHOCKING Truth About Lawns!
Welcome To 2030: I Own Land, Live Among Like Minded People, And Life Has Never Been Better
Traumatized Society
The Real Future of Work
Off Grid Living is a LIE
The Science of Food Preservation
Outsourcing Everything
Top 50 Lost Skills And Hobbies