Doctors Are The THIRD Leading Cause Of Death

"Graduating from medical school is not an indicator of intelligence." ~ Yolande Norris-Clark

“Medical science has made such tremendous progress that there is hardly a healthy human left.” ~ Aldous Huxley

“The practice of medicine may not be the world’s oldest profession, but it is often to be operating on much the same principles.” ~ Eustace Mullins “Murder By Injection”

“Doctors need 3 qualifications: To be able to lie and not get caught, to pretend to be honest, and to cause death without guilt.” ~ Jean Froissart 1337-1405

"The cure of many diseases is unknown to physicians because they are ignorant of the whole… For the part can never be well unless the whole is well." ~ Plato

Medical Malpractice is the 3rd leading cause of death! 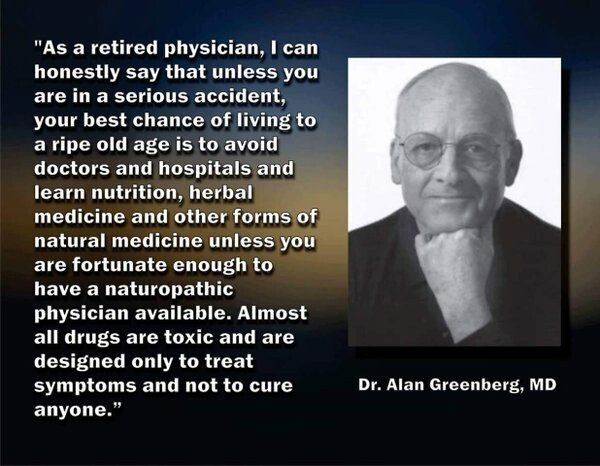 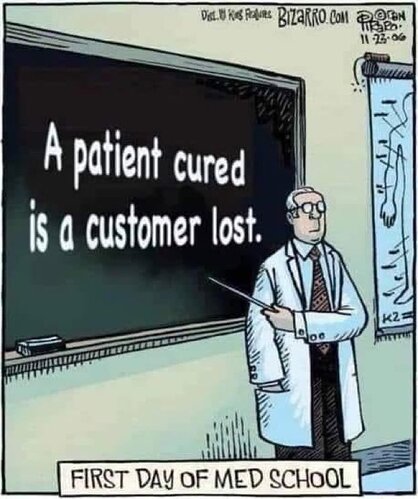 PatientCuredCustomerLost622×743 69.8 KB
@
Saying you’re a doctor trained in allopathic, Rockefeller medicine & you believe it gives you status b/c you can prescribe pharma drugs is about as impressive as saying you’re a chef at Burger King & know how to make secret sauce for the Whopper. Actually, the chef is way cooler. 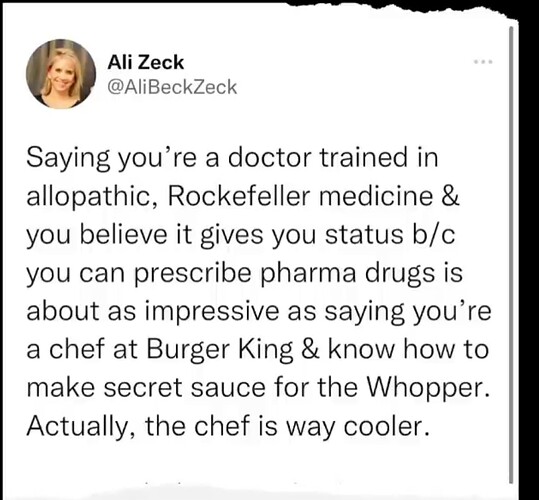 RockefellerDoctor1236×1146 78.5 KB
@
If you’re afraid of #COVID, you’re also afraid of nature & yourself. You’ve bought into the belief of #Rockefeller medicine that outlaws your own immunity to protect you & instead you’ll need to pay for someone/something to heal you. You’re making others rich at your own expense
@
Once John Rockefeller learned he could make petro drugs w/petroleum from his Standard Oil company he ran a campaign to witch-hunt holistic/natural practitioners & then controlled the medical universities & here we are-people believe toxic chemicals heal & mocking natural methods.

"When you understand what a

show practicing medicine in the US has become, then you understand why so many MD’s my age (51) are looking for the exit, ASAP." ~ MontgomeryMD

Why I No Longer Trust Doctors Or Hospitals - CD Media

It truly disappoints me to say that I have little to no trust in physicians or hospitals, but as an institution, they have broken the bond of trust. 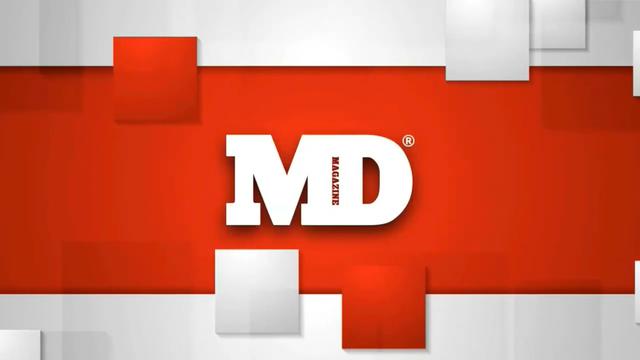 Doctors: #3 Cause of Death

Doctors have held the number 3 spot for a good while now when it comes to causes of death in the United States. They have managed to hold onto this spot without even having large studies. 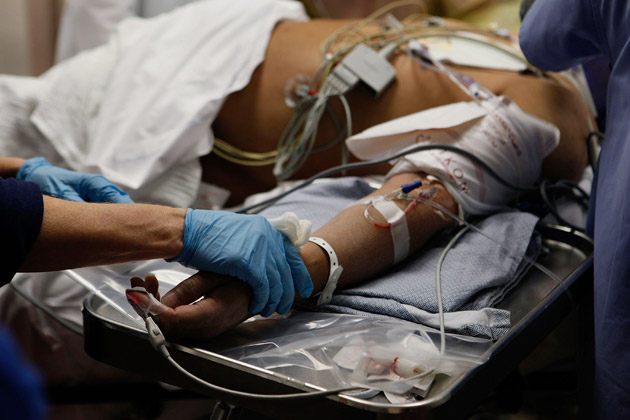 Death of Americans: The Medical System is Now the Third Leading Cause of...

A new study says that the number of deaths from medical errors may be much higher than what is being reported. This study estimates that between 210,000 and 440,000 patients each year who go to the hospital for care suffer some type of preventable... 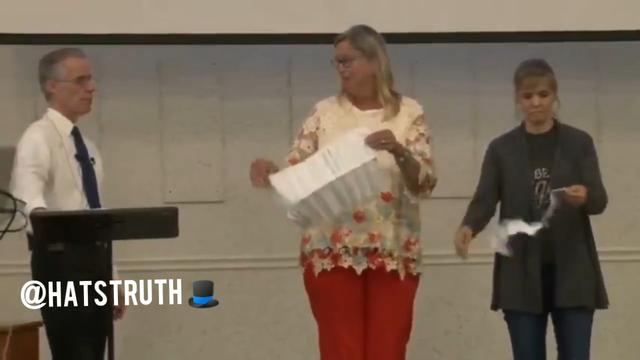 Physicians expose how little information pharma companies give us for... 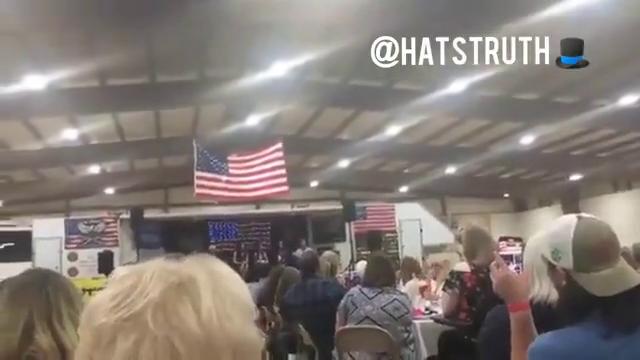 DOCTOR WARNS TO STAY OUT OF THE HOSPITALS AND SAYS THE PROTOCOL IN HOSPITALS...

Hospitals Now #1 Cause of Death: Medical Kidnapping the Norm as Patients are Sacrificed on the Altar of COVID Stories & Articles

[Hospitals are under a monopoly and it’s bad.] Backup: https://www.unschooling.com/search?q=hospitals

Doctors Are Not Taught About Vaccines In Medical School

You know what else Doctors are not taught about in medical school…Nutrition or Holistic Health!

The Sickness Business Over 8 Million (11%) of the 74 million kids in the USA are taking psychiatric drugs alone. Many other kids abuse alcohol, marijuana and other mind altering illicit drugs. Psychiatry is a scam, it’s all about money at the expense of children. The side effects alone are horrendous, what sane parent gives their kids meds that cause suicide? Highly recommend the first documentary below, Psychiatry An Industry Of Death. THIS IS A NATIONAL CRISIS! And the lucky kids who aren’t b…

Vaxines.com All vaccines destroy your natural immunity! California among other states literally force kids that go to school to get all kinds of vaccines completely disregarding their informed consent. There are NO safe vaccines! The vaccine companies are not even responsible for the BILLIONS of dollars in damages and lost lives they have caused, you know who always foots the bill, taxpayers, because decades ago the vaccine makers lobbied congress that they are not responsible for any damages t…

They Tell Us to ‘Trust the Science.’ But Who Paid for It?
Unschooling Pets
Top Biden Health Official: All Pediatricians Agree With Castrating Gender-Confused Children
Children’s Gender Clinic Founder was a Consultant for Puberty Blocker Manufacturers
Every Doctor Overprescribing Antidepressants
Candace Owens Birth Story - Why The Hospital Threatened to Send CPS and Charge Me with a Misdemeanor
Medical School Worships Ideology Over Science
Dr. Peter McCullough's Medical License REVOKED For Speaking The Truth About COVID
Self Care
Doctors Are Not Taught About Vaccines In Medical School 🤯
THRIVE II: This Is What It Takes
Doctor On TikTok Advertises Mastectomies And Sex Changes To Children
St. Jude’s Children’s Research Hospital Is Hoarding Billions? Families Testify It’s Not Really Free As Advertised
Germ Theory vs. Terrain Theory
All California Schoolchildren Must Be Force Vaccinated Against COVID-19 Under New Bill
Fear Merchants
Hospitals Now #1 Cause of Death: Medical Kidnapping the Norm as Patients are Sacrificed on the Altar of COVID
Disowning Your Children
Freedom Convoy
An Entire Generation Of Women On Birth Control
Natural Immunity Is a Conspiracy Theory 🤣
The medical-school accreditation body places an increasing emphasis on “diversity, equity, and inclusion.”
You won’t believe what my baby’s pediatrician said to me
Woke medical student brags on social media about intentionally injuring patient over gender pronouns comment
REVEALED: Who funds the American Academy of Pediatrics?
Doctors Are Butchering Our Children
Atty. Jay Sanchez tells Dr. Bryan Ardis: A lot of doctors are slaves to the medical system
At least 39 of America's 50 most prestigious medical schools exposed for having mandatory Critical Race Theory training in their curriculums
The "Safe and Effective" Narrative Is Falling Apart