Privileges Are NOT Rights

"Rights aren’t rights if someone can take them away. They’re privileges. That’s all we’ve ever had in this country, is a bill of temporary privileges. And if you read the news even badly, you know that every year the list gets shorter and shorter." ~ George Carlin

“You only have power over people as long as you don’t take everything away from them. But when you’ve robbed a man of everything, he’s no longer in your power—he’s free again.” ~ Alexander Solzhenitsyn

“The more corrupt the state, the more numerous the laws.” ~ Cornelius Tacitus, Roman Historian and Politician

What natural rights do we really have when everything has been made a privilege that you need a license to do? We are all slaves to this system! Even our Constitutional Rights have been turned into government privileges by corrupt politicians seeking money and power by exploiting the population. The schools have dumbed people down so much, most people don’t even understand the difference between a right & a privilege. Our society has been so completely brainwashed to the point most people literally think Government Privileges are Rights.

Government Privileges Are Not Rights.

All rights are absolute. The definition of an absolute right is a right limited only by the equal rights of others.

What part of “Shall Not Be Infringed” do people not understand?

Politicians infringe upon the rights of the people:

"Schools brainwash children so politicians can control them." ~ Unschooling.com "The best way for kids to learn about politics is by going to a puppet show!" ~ Unschooling.com Politicians are Selected, NOT Elected! [RulingClass] Americans choosing their favorite politicians is like slaves choosing their favorite masters. "Elections are people picking people to control their lives" ~ Aleister Crowley "Politicians should wear sponsor jackets like Nascar drivers, then we kno…

First Amendment
“It guarantees freedom of expression by prohibiting Congress from restricting the press or the rights of individuals to speak freely. It also guarantees the right of citizens to assemble peaceably and to petition their government.”
“Freedom of speech is a principle that supports the freedom of an individual or a community to articulate their opinions and ideas without fear of retaliation, censorship, or legal sanction.”

Free Speech and the freedom to peacefully assemble (protest) have been vehemently attacked over the years and today we are living in 1984 where we must ask the government permission to peacefully protest and many people are arrested for exercising their Freedom of Speech.

"The schools are Religious institutions, NOT Methodist or Catholic, but they are designed to protect the Religion of the Elite." ~ Professor William Deresiewicz "To these religious institutions of colleges and the media…it is time to stop trying to pretend that they are open to discourse or working with them…will affect the change that is necessary for the republic…The only way to win, in my view, is to not play this game anymore. The only way to win is to build up o…

Second Amendment
“The right of the people to keep and bear Arms, shall not be infringed.”

The Gun Control Act of 1968 turned the Right to Bear Arms into a government privilege by requiring a license to own a gun and shortly after The Federal Bureau of Alcohol Tobacco and Firearms (ATF) was created to issue issue firearms licenses and conduct firearms licensee qualification and compliance inspections. Gun Control doesn’t control criminals because laws don’t prevent crime.

Biden introduced “Gun Free Zones” with the Gun-Free School Zones Act of 1990 and ever since schools shootings have increased dramatically as many say he is to blame for school shootings. [Federal Gun Control in America: Gun-Free School Zones Act of 1990] https://thepoliticalinsider.com/joe-biden-school-shooting/ 94% of Mass Public Shootings occur in “Gun Free Zones” since 1950 [Screen-Shot-2019-08-06-at-4.46.20-PM] School Shootings are #7 on our Normalization post: …

“Civil Wars happen when the victimized are armed. Genocide happens when they are not.” ~ A.E. Samaan

"A system of licensing and registration is the perfect device to deny gun ownership to the bourgeoisie." ~ Vladimir Ilyich Lenin

“To disarm the people is the best and most effectual way to enslave them." ~ George Mason

“An armed society is a polite society. Manners are good when one may have to back up his acts with his life.” ~ Robert A. Heinlein

"Laws that forbid the carrying of arms … disarm only those who are neither inclined nor determined to commit crimes. Such laws make things worse for the assaulted and better for the assailants; they serve rather to encourage than prevent homicides, for an unarmed man may be attacked with greater confidence than an armed one." ~ Thomas Jefferson

“To ban guns because criminals use them is to tell the innocent and law-abiding that their rights and liberties depend not on their own conduct, but on the conduct of the guilty and the lawless, and that the law will permit them to have only such rights and liberties as the lawless will allow. … For society does not control crime, ever, by forcing the law-abiding to accommodate themselves to the expected behavior of criminals. Society controls crime by forcing the criminals to accommodate themselves to the expected behavior of the law-abiding.” ~ Lysander Spooner

"The only power any government has is the power to crack down on criminals. Well, when there aren’t enough criminals, one makes them. One declares so many things to be a crime that it becomes impossible for men to live without breaking laws." ~ Ayn Rand

"There’s no way to rule innocent men. The only power any government has is the power to crack down on criminals. Well, when there aren’t enough criminals, one makes them. One declares so many things to be a crime that it becomes impossible for men to live without breaking laws. Who wants a nation of law-abiding citizens? What’s there in that for anyone? But just pass the kind of laws that can neither be observed nor enforced nor objectively interpreted – and you create a nation of law-breakers – and then you cash in on guilt. Now, that’s the system, Mr. Rearden, that’s the game, and once you understand it, you’ll be much easier to deal with." ~ Ayn Rand [Atlas Shrugged, 1957]

“Laws are like cobwebs, which may catch small flies, but let wasps and hornets break through.” ~ Jonathan Swift

“Neither the wisest constitution nor the wisest laws will secure the liberty and happiness of a people whose manners are universally corrupt." ~ Samuel Adams

Just a friendly reminder, we had more freedoms under Great Britain prior to 1776 than we do right now: 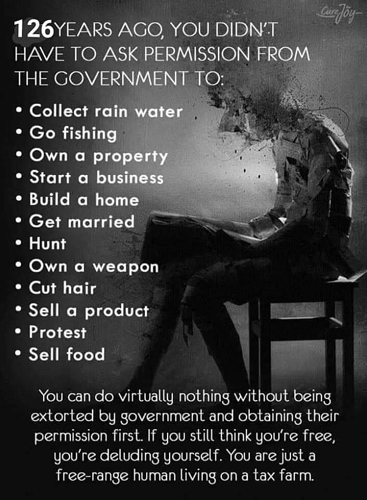 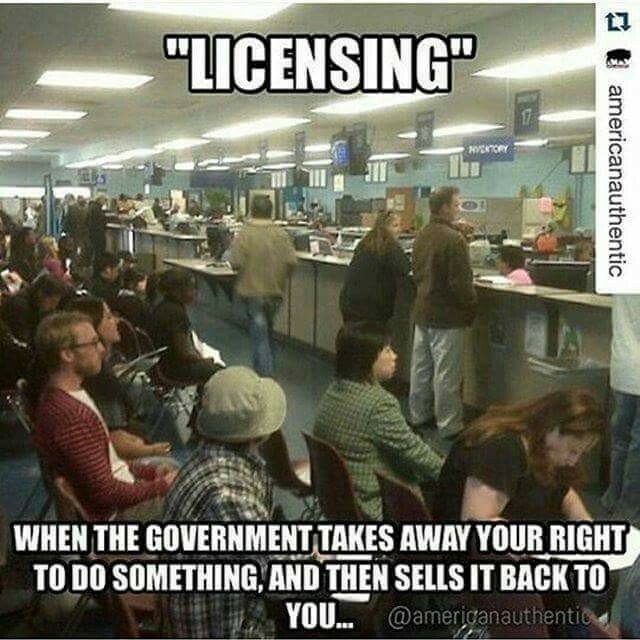 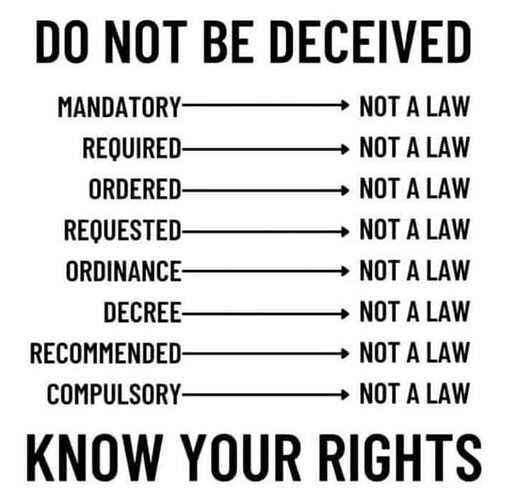 "Parents give up their rights when they drop their children off at public school." ~ Melinda Harmon, Federal Judge, 1996 “Children don’t like school because they are not free.” ~ Peter Gray A lot of parents will do anything for their kids except let them be themselves. No rights means no values. Rights protect peoples values. Instead we deny many of the children’s rights that protect and build upon these values. There are approximately 75 million kids under 18 which is 23% of the entire popul…

Them Before Us: Why We Need a Global Children's Rights Movement Tools & Resources

The Right to Control One’s Learning Videos & Podcasts
Why Government Is Bad
The Shocking Truth About The Military
Lawless
Debt Slaves
Facts Beg The Question – Was Uvalde School Shooting Manufactured To Take Your Guns?
Student In Custody After Fatally Shooting Classmate At South Carolina Middle School
Armed Teachers
Right To Travel
PROOF: Government is a Real Slavemaster
The Government Is Free To Do Anything It Pleases While Your Children Have To Ask Permission To Use The Bathroom
"Sheeple" | Tom MacDonald 🔥
The Constitution Has Already Been Terminated